» Willie Lynch letter: The Making of a Slave

» The Art of Slander

» The Jewish Plan for Genocide of USA Whites

Who Brought the Slaves to America? 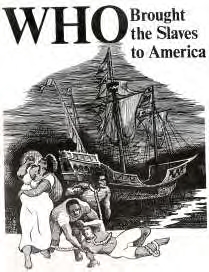 By Walter White Jr., 1968
Book coverThe story of the slaves in America begins with Christopher Columbus. His voyage to America was not financed by Queen Isabella, but by Luis de Santangelo, who advanced the sum of 17,000 ducats (about 5,000 pounds-today equal to 50,000 pounds) to finance the voyage, which began on August 3, 1492.
Columbus was accompanied by five 'maranos' (Jews who had foresworn their religion and supposedly became Catholics), Luis de Torres, interpreter, Marco, the surgeon, Bemal, the physician, Alonzo de la Calle and Gabriel Sanchez (1).


Gabriel Sanchez, abetted by the other four Jews, sold Columbus on the idea of capturing 500 Indians and selling them as slaves in Seville, Spain, which was done. Columbus did not receive any of the money from the sale of the slaves, but he became the victim of a conspiracy fostered by Bemal, the ship's doctor. He, Columbus, suffered injustice and imprisonment as his reward. Betrayed by the five maranos (Jews) whom he had trusted and helped. This, ironically, was the beginning of slavery in the Americas (2).
The Jews were expelled from Spain on August 2, 1492, and from Portugal in 1497. Many of these Jews emigrated to Holland, where they set up the Dutch West Indies Company to exploit the new world.
In 1654, the first Jew, Jacob Barsimson, emigrated from Holland to New Amsterdam (New York) and in the next decade many more followed him, settling along the East Coast, principally in New Amsterdam and Newport, Rhode Island.